Gorgeous Weather for a Hike 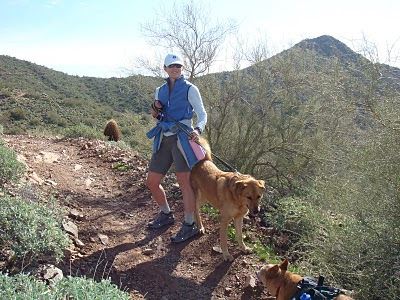 The weather here in Phoenix, Arizona is, as you know, gorgeous this time of year. My friend and I and our dogs hiked the Ringtail Trail and the Sunset Trail making a big loop of about 5 miles. This trail is east of Scottsdale off of Shea and 124th St. There are restrooms at the trail head as well as biodegradable dog poop bags. You will also find a huge trail map and info. Happy trails!
Posted by Devon Smith-Breidel at 5:13 PM No comments:

Perils of plastics? Survey of risks to human health and the environment
"Today, plastics accumulate in garbage dumps and landfills and are sullying the world's oceans in ever-greater quantity. And plastics and their additives aren't just around us, they are inside virtually every one of us -- present in our blood and urine in measureable amounts, ingested with the food we eat, the water we drink and from other sources.
What are the overall effects of the plastics we unwittingly ingest? The literature Halden surveyed is ambiguous on this point, despite more than half a century of study. Part of the difficulty lies in the absence of good controls for studying health outcomes, as plastic exposure is a global phenomenon, and finding unexposed subjects for comparison is nearly impossible. It is known however that health effects vary depending on who is exposed -- and when. Infants and pregnant or nursing mothers are at heightened risk for toxic exposure or passage of BPA and additives like DEHP.
This January, the FDA announced an important reversal of its 2008 claims regarding the safety of bisphenol-A, expressing new concern about "potential effects of BPA on the brain, behavior and prostate gland of fetuses, infants and children," and pledging to collaborate with other federal health agencies to reevaluate the chemical's safety." From www.Sciencedaily.com
Posted by Devon Smith-Breidel at 10:30 PM No comments:

Can't seem to fit in exercise into your day or week? Bored with your current routine? Add in some interval training and your body will become more efficient in a shorter period of time while burning more calories! Read more: www.msnbc.msn.com/id/35581793/ns/health-fitness/ns/health-fitness/
Posted by Devon Smith-Breidel at 10:03 PM No comments:

Did You Say An Hour?

To maintain healthy weight older women should exercise an hour a day...use this link to read more on this 13 year study. (Add in a few of the above interval training sessions) www.msnbc.msn.com/id/36006035/ns/health-fitness/
Posted by Devon Smith-Breidel at 9:52 PM No comments:

Prescribing Music for the Heart

Click the link to see a short video from WebMD:
Prescribing Music for the Heart

Posted by Devon Smith-Breidel at 6:00 AM No comments:

To find out your BMI (Body Mass Index) go to www.webmd.com enter your height, weight, age, etc. and click on 'calculate'. This tool will also calculate your RMR (resting metabolic rate), target heart rate zones, and suggested caloric intake specific to your fitness goals.
Posted by Devon Smith-Breidel at 10:00 PM No comments:

The latest Gallup-Healthways Well-Being Index lists the 10 most obese metropolitan areas in the U.S. and finds that adult obesity rates in each are significantly greater than the national average of 26.5%.

Here's a list of the 10 most obese metro areas, with those ranking highest having the greatest obesity rates.

Posted by Devon Smith-Breidel at 6:33 PM No comments:

"The more you exercise and the less you eat, the more likely your body is to hibernate. That is, you'll conserve calories and thwart your efforts to lose fat. The better bet is to exercise reasonably and to increase your food intake early in the day to fuel your training. Eat breakfast, lunch and an afternoon snack. Then eat lightly for dinner and afterward." -- "The Runner's World Complete Book of Running, edited by Amby Burfoot.

A friend forwarded this e-mail to me from Physician Skin Solutions at Arrowhead in Arizona:

Vitamin D is naturally produced in human skin when exposed to sun light. The active form of vitamin D in the body plays an important role in the maintenance of many organ systems. One of the primary things we associate this vitamin with is the mineralization of bones and keeping bones healthy. Vitamin D has other roles in human health, including modulation of neuromuscular and immune function and reduction of inflammation.
Insufficient Vitamin D is linked to virtually all age related disorders, including cancers, heart disease, vascular disease, and inflammatory conditions. There is a direct correlation with increased age and decreased serum levels of vitamin D. If you intend to live an active lifestyle and wish to join the fight in warding off disease then vitamin D should be a part of your arsenal.

Overall Benefits
High levels of Vitamin D report fewer viral infections (such as colds and flu viruses)
Children also demonstrate this resistance to such winter infections, when their serum vitamin D levels are high in comparison to those with low levels.
Scientists believe reduced vitamin D levels in the winter months are a major contributing factor in the increased infectious disease cases during this time. Study after study seems to support that as serum levels of Vitamin D increased the incidence of upper respiratory infections drastically decreased, in both children and adults. Vitamin D down-regulates the production of inflammatory agents in the body that lead to serious complications with flu viruses and aging joints, arteries, and nerves.

Testing
A blood test is available through PSS to assess your current levels of the metabolically active form of vitamin D, 25-hydroxyvitamin D.

For more information go to: www.physicianskinarrowhead.com
Posted by Devon Smith-Breidel at 11:21 AM No comments:

This is a great site that I am following on Twitter. You can enter your zip code to find local restaurants, farmers markets, and Co-ops.
Eat Well Guide :: Local, Sustainable, Organic Food

Do it FOR THE HEALTH OF IT!
Posted by Devon Smith-Breidel at 8:00 PM No comments:

Boost Your Immune System With These 8

If you want to help support a healthy immune system, be sure your diet includes plenty of natural vitamin C. This powerful antioxidant plays a central role in the repair and regeneration of tissues, and helps protect cells throughout the body. Good food sources of vitamin C that are abundant and can be enjoyed all year long include:

Although supplemental vitamin C is available in many forms, [Dr.Weil] suggests using a simple vitamin C supplement derived from d-glucose, taken with a meal to prevent stomach upset.

Posted by Devon Smith-Breidel at 12:00 PM No comments:

Also from Live Science: A myth about women:

Tossing and turning not only causes women more psychological distress, it also raises their insulin and inflammation levels -- risk factors for compromised health, found a 2008 study of 210 people led by Edward Suarez at Duke University.

A study of more than 6,000 participants, led by researchers at the University of Warwick in 2007, found that women who slept five or less hours a night were twice as likely to suffer from hypertension than women who slept for seven or more hours. Among men, there was no such relationship. Sleeping Beauty may be better off waking up on her own watch.

Posted by Devon Smith-Breidel at 10:00 AM No comments:

As a Personal Trainer and a Corrective Exercise Specialist I am passionate about everything related to fitness, food, health, wellness, corrective exercise, activities, training, fitness fads, flexibility, events and the latest research! To read my bio and to learn more visit my website www.coredynamicfitness.com

Found this recipe on the following blog and have made it several times.

put all the ingredients in blender or food processor + blend until smooth.
top with fresh fruit and/or whipped cream, serve + enjoy!

where are they coming from?